OK, I admit it, the Pirates Graveyard isn’t really a burial place for pirates, in fact the correct name is St. Regulus’ Graveyard, but as almost all the gravestones bear skull and cross bones the locals have named it thus. Tucked away at the eastern tip of the Black Isle, in the pretty village of Cromarty, Highlands, Scotland, the Pirates Graveyard is a tranquil yet evocative site. The graveyard itself is not signposted, but you will know when you have reached your destination as the entrance path is just opposite the servants’ tunnel (now disused) that leads up to the secluded Cromarty House. 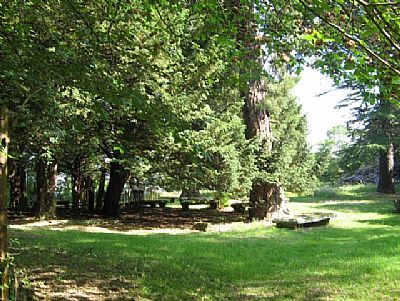 The ruins of the old chapel of St. Regulus once occupied the edge of a narrow projecting angle, but it is now lost by the encroachment of the adjacent ravine. What remains are a few shapeless mounds and the grassed-over walls of the private chapel of the Urquhart clan chiefs. Entry to the crypt is still possible today. A single flight of stairs lead down into the musty darkness, the crypt opening protected by the Urquhart clan crest, situated proudly above the doorway. 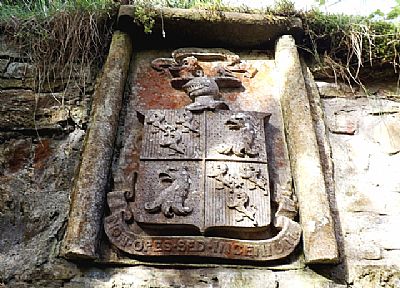 A few yards from here there is a rather splendid skull and crossbones gravestone, which bears the name of the ‘burnt cook.’ According to local tradition it is said that the children of Cromarty must spit on this particular stone as they pass by. Why is not known, there is no account of its origins, although in Clavis Calendaria it states that in some places in England it was customary for people to spit every time they named the devil. Maybe he was just a really bad cook! 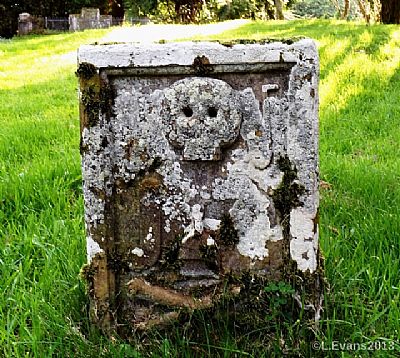 The graveyard has a particular significance to the highly-acclaimed writer and renowned geologist Hugh Miller. Opposite the Urquhart crypt stands the little headstone of Hugh and Lydia Miller’s first-born child Eliza, who died of a fever aged only seventeen months. In fact, this is the last piece of stonework that Miller carved. Several of his ancestors lie beside her and before their marriage, the Pirates Graveyard had been one of Hugh and Lydia’s trysting places during their long courtship. 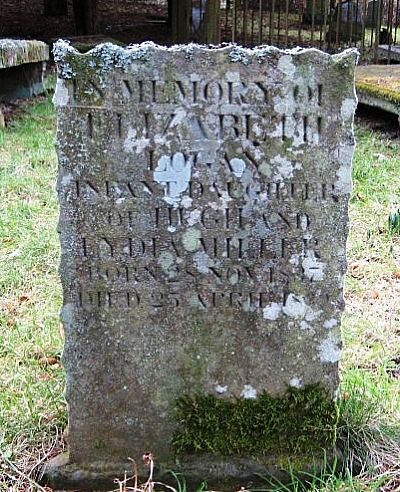 Hugh Miller gives an interesting description of the gravestones in his Scenes and Legends of the North of Scotland. He states:

‘They are mostly all fashioned in that heavy grotesque style of sculpture, which, after the Reformation had pulled down both the patterns and patrons of the stone-cutter, succeeded, in this part of the country, to the lighter and more elegant style of the time of the Jameses. The centres of the stones are occupied by the rude semblances of skulls and crossbones, dead-bells and sand-glasses, shovels and spectres, coffins and armorial bearings; while the inscriptions, rude and uncouth as the figures, run in continuous lines round the margins. They tell us, though with as little variety as elegance of phrase, that there is nothing certain in life except its termination; and, taken collectively, read us a striking lesson on the vicissitudes of human affairs.’

A somewhat derogatory account of what I consider to be some of the most stunning gravestones that have survived to date. But Miller was writing at a time when Presbyterianism ruled the day and such emblematic insignia was considered an affront to such religious dogma.

Viewed from the ruins of the crypt, the designated burial ground clusters beneath a fence of trees, where a number of seventeenth and eighteenth century grave slabs, each one intricately decorated in the ‘memento mori’ style, sit. For those unfamiliar with the term, ‘memento mori’ is Latin for ‘remember you will die’ and it gives its name to a unique style of burial sculpture, which includes the skull and crossbones, angels of the resurrection, dead-bells, coffins, spades, timers and so on. The Pirates Graveyard is exceptional in that practically every grave-marker above ground falls into this category. I have chosen just a few examples for your enjoyment.

The so-called ‘Davidson Stones’ lie sheltered beneath the branches of a large Cyprus tree and consist of a delightful matching pair of ‘husband and wife’ memento mori grave slabs. Although the dates have been somewhat eroded the style of sculpture fits neatly into the eighteenth century pattern. The inscription reads as follows: ALEXANDER DAVIDSON notar public in Cromarty who died (? eroded) spouse ELSP(eth?) (? Eroded)….Sapienter Sincere 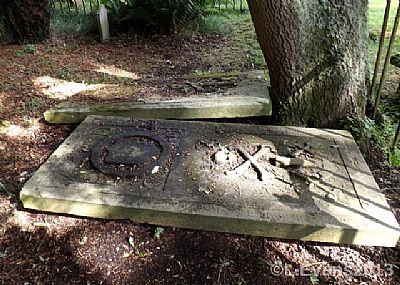 The second example belongs to a member of the Urquhart clan and dates to 1712. It consists of your standard memento mori carvings complete with an Urquhart heraldic shield. The inscription reads: Here lyes the body of JOHN URQUHART glover in Cromarty who died in 1712 and his spouse MARGARET SIMPSON/who died the—–of——-MARY THOMSON his second spouse. 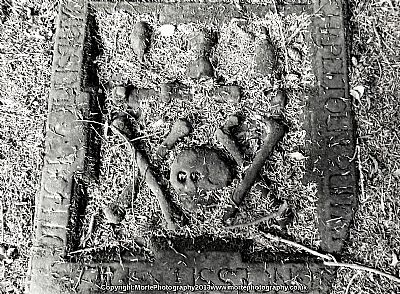 Leaving the best to last, it could be argued, is the quite stunningly beautiful ‘Swan Stone.’ Lying precariously on its side, and somewhat ‘green’ in nature, this particular example is one of the oldest grave slabs to be found in the burial ground, the earliest inscription notes the death of a JO.SWAN in 1675. Again we find the standard memento mori carvings of a skull and crossbones et al but also the unusual addition of a ship, a ship with sails no less. It, therefore, begs the question, could there be a ‘pirate’ connection after all? 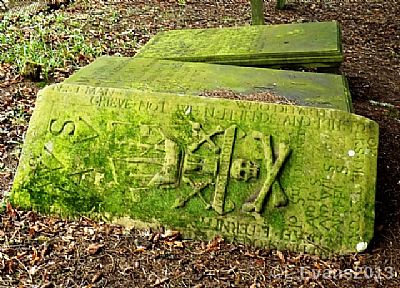 So there you have it. I hope you have enjoyed this brief introduction to a gem of a graveyard and if you are ever venturing into these distant lands, a detour to St. Regulus is well advised. You will not regret it.

Just outside the confines of the burial ground lies the grave of Alexander Wood, who died in 1690. In the past such unconsecrated ground was the usual domain of suicides, witches and unbaptized children, having been denied a proper burial within the graveyard confines. But Alexander was none of these, so how did he come to rest among the outcasts? A tale of treachery and vengeance it so seems......

Regarded as a generous man by all who crossed his path, it was also well known that if Alexander was slighted in any way "he fermented a hatred inside which was bound eventually to manifest itself in poisonous revenge." Now the Wood family had a neighbour, a shoemaker, who was well known in Cromarty for his sly wit and practical jokes and both houses shared the same piece of ground, divided by four large stones. One day Alexander noticed that year by year not only was his patch of land becoming less fertile, but it also seemed to be shrinking in size. Puzzled by this he decided to measure his garden, to see if he was imagining things or not, and was astounded to discover it really was getting smaller. So one Spring morning, having been awoken early by a noise in his garden, the truth was finally revealed to him. For there was his neighbour, the shoemaker, with a crowbar, raising one of the four dividing stones and moving it a couple inches across towards the Woods land. Without hesitation Alexander quietly stepped over his window ledge, crept forward and tackled his neighbour around the ankles. The shoemaker, letting out a yell, fell face down in the soil. The village inhabitants, hearing the cries of the shoemaker, lept from their beds and rushed to where the noise was coming from.

"Neebours," said the shoemaker, who had the double advantage of being exceedingly plausible, and decidedly in the wrong, "I'm desperately ill-used this morning—desperately ill-used;—he would baith rob and murder me.  I lang jaloused, ye see, that my wee bit o' a yard was growing littler and littler ilka season; and, though no very ready to suspect folk, I just thought I would keep watch, and see wha was shifting the mark-stanes.  Weel, and I did;—late and early did I watch for main now than a fortnight; and wha did I see this morning through the back winnock but auld Sandy Wood there in his verra sark—Oh, it's no him that has ony thought o' his end!—poking the stones wig' a lang kebar, intil the very heart o' my grun'?   See," said he, pointing to the one that had not yet been moved, "see if he hasna shifted it a lang ell; and only notice the craft o' the bodie in stirring up the yird about the lave, as if they had been a' moved frae my side.  Weel, I came out and challenged him, as wha widna?—says I, Sawney my man, that's no honest; I'll no bear that; and nae mair had I time to say, when up he flew at me like a wall-cat, and if it wasna for yoursels I dare-say he would have throttled me.  Look how I am bleedin';— and only look till him—look till the canker deceitful bodie, if he has one word to put in for himsel'.

Speechless at the sheer cheek of his neighbour and incandescent with rage, after all the shoemaker’s accusations were precisely those he would have made himself, Alexander lunged at his neighbour. Three times he made a concerted effort to reach him, but three times he was held back by the good folk of Cromarty. Finally, Alexander had no choice but to storm back into his cottage, his anger unabated.

The story does not end here folks because Alexander would have the last word, of that he was sure. For among the townsfolk of Cromarty there was a belief that the Last Judgement would be conducted on Navity moor, a few miles west of the town. True to his word, upon his deathbed Alexander called his family close and requested that he be buried just outside the wall of the chapel graveyard. Being strategically placed there, he would have a headstart on the shoemaker when the last trumpet was sounded. “Before the wee toad can get his boots on,” Alexander would be up on the moor pleading his case, which was denied to him when he was alive. This time he would be heard and believed.

This is how Alexander Wood came to be buried where he is today.

The Grave of Alexander Wood

Comment from Roger Bowdler at 05:20 on 01 August 2017.
Exemplary - fresh findings, great pictures, and well-researched. Thank you for sharing, and whetting appetite.
Comment from Jean Sweeney at 14:02 on 25 January 2021.
Visited this place few years ago very interesting indeed also the crypt