Invermoriston is not a One-Horse town!

Around seven miles north of Fort Augustus, nestled along the banks of the mighty Loch Ness, you will find the small Scottish village of Invermoriston. It is what our American cousins would call a 'one horse town,’ but without the horse! OK, a bit unfair, but it's one of those places that people drive through to get to somewhere else, in this particular instance either to Fort William or the Isle of Skye. A pity as Invermoriston does have a few secret gems to offer the intrepid traveller, such as a fine example of a Thomas Telford bridge, see below, spanning the gorge over the River Moriston. It is one of nearly a thousand bridges built by Telford between 1800 and 1819 as part of a general plan to improve communications in the Highlands. Just along from the bridge is a sacred well named after St. Columba, who journeyed through the Great Glen on his way to visit the Pictish King, Brude. Renowned for its healing properties, the well remains an object of veneration throughout the local area today. Invermoriston also has a small grocery/gift shop, a leather craft shop and a small hotel, the GlenMoriston Arms, which once belonged to the Grant family, one of the oldest clans in Scotland. Plus approximately two hundred metres down the so-called Skye road there is a splendid coffee shop, the Glenrowan Cafe, which has a fine selection of food and coffee on offer, a godsend to any researcher in the field. 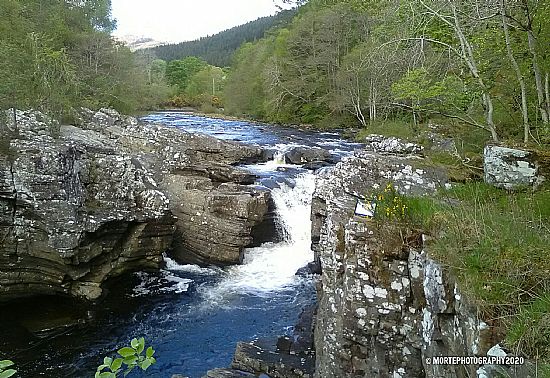 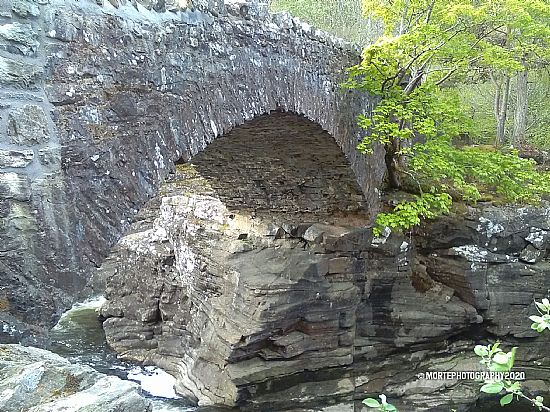 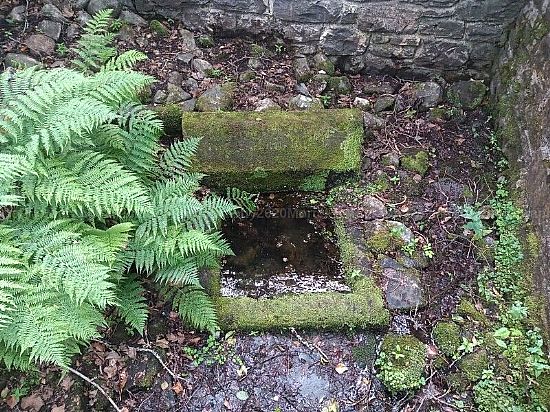 The purpose of my visit was Invermoriston Burial Ground, which I had passed by on many occasions over the years. Yes I admit it, on my way to somewhere else, but today I was determined to rectify said oversight. So armed with my camera, a rucksack of provisions and a Citylink bus timetable, I hopped on the coach from Inverness and approximately fifty minutes later I found myself standing on the grass verge of the A32, opposite a pair of monolith gate piers. Walking through these representations of a bygone age, the burial ground is approached via a short drive, to the left of which is to be found a small modern area dedicated to recent passings, whereas the older traditional burial site can be found at the end of the drive, the entrance again flanked by simple monolith piers together with an outer pedestrian gateway. Square in design, and surrounded by a rubble wall, inside can be found an eclectic mix of various 18th and 19th century tombstones. 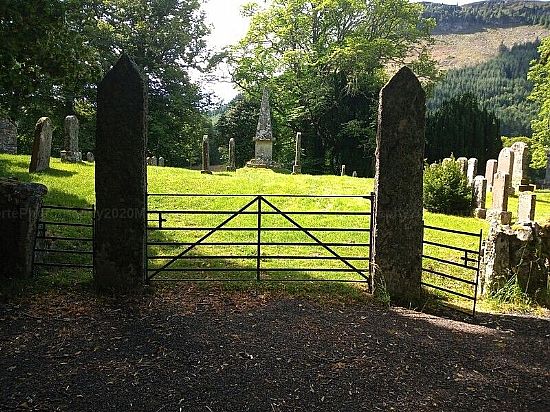 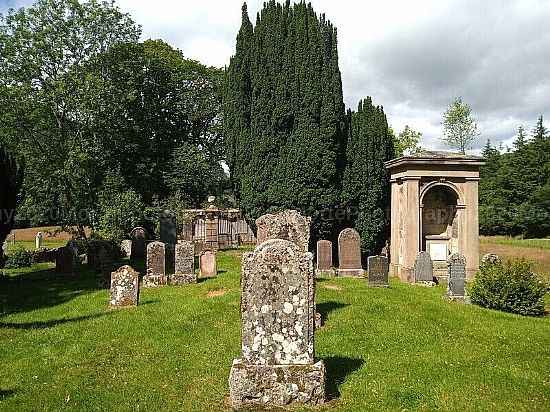 Immediately to the right of the entrance gate one is drawn to an exceptionally tall, monumental arch, I would hazard a guess at approximately twenty feet tall, which is dedicated to Patrick McDonell M.D. who died in Bombay in 1825. Erected by his grieving father, an accompanying plaque states that said memorial is similar to the one that was placed upon his tomb in India, therefore I do feel obliged to investigate further. Watch this space, as they say, on this matter. 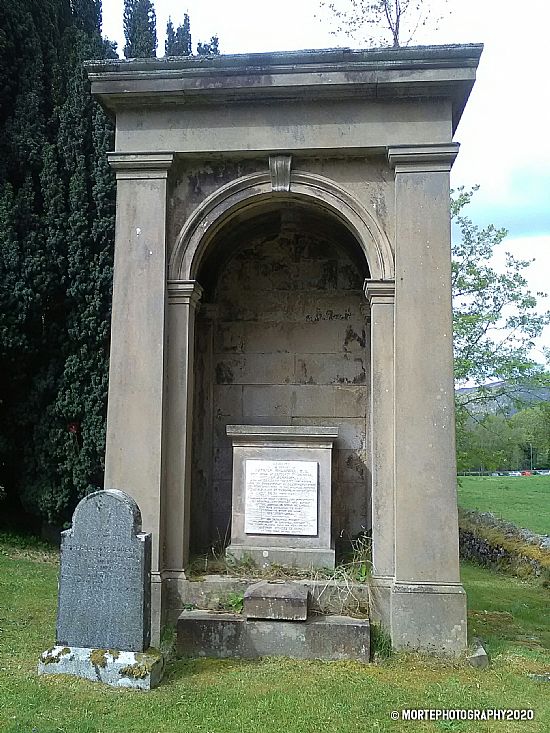 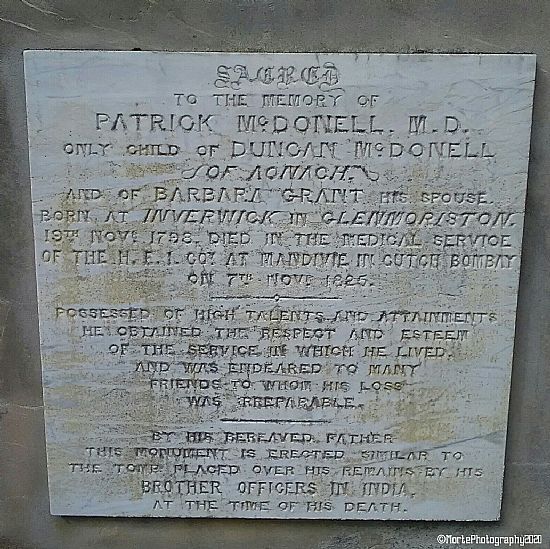 Directly behind this monument is a designated gated enclosure, dating to 1794, for members of the Grants of Invermoriston. The enclosure is surrounded by a low coped retaining wall topped with spearhead cast-iron railings; it's entrance flanked by a pair of square rusticated ashlar gate piers and cast-iron gates. Inside one can find a pair of low coped tombstones, denoting two Laird's of GlenMoriston, together with a number of memorial wall plaques commemorating those Grants who died during the Second World War, such as Squadron Leader Frank Philips Grant, who was killed at Tobruk in 1942 and Captain Alan James Grant, killed in action in Tunisia in 1943. There is also a plaque dedicated to Major Hugh Murray Grant M.C. MBE who was killed at Loita, Kenya in 1946. His death is attributed to a young Maasi warrior, a member of the Engidong clan, who is reported to have thrust his spear through Murray's body during a disagreement about cattle. Murray died instantly, whilst the young Maasi was later hanged. 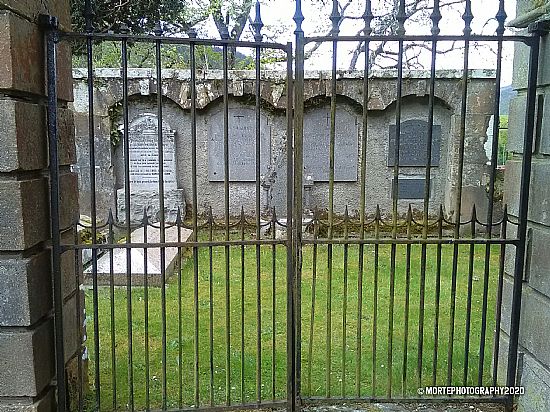 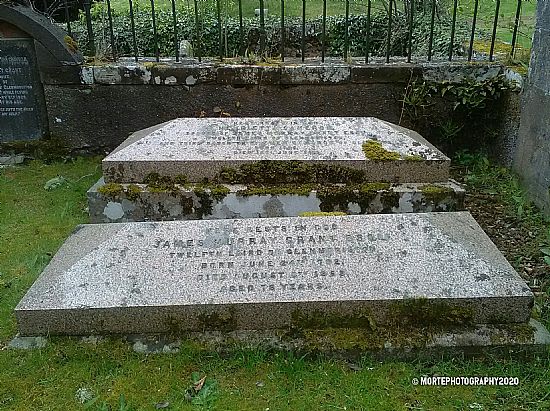 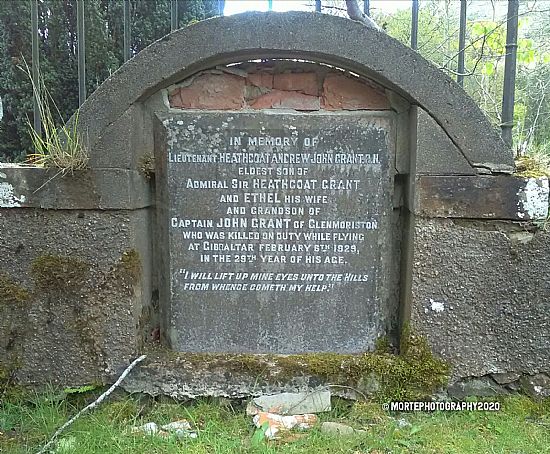 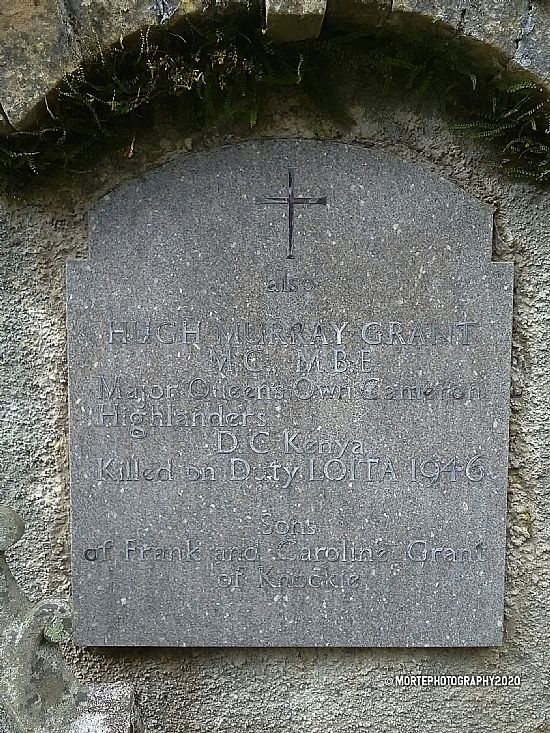 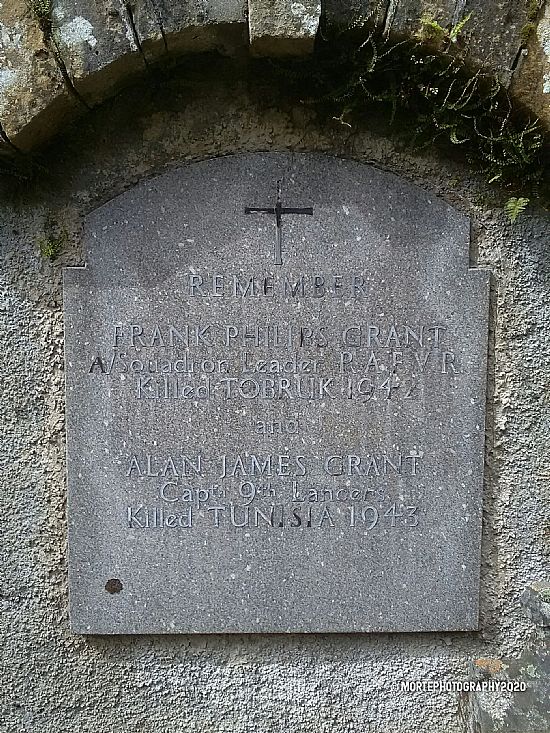 Roughly in the centre of the burial ground there is a strange monument erected by Peter McCloud, the official Piper of GlenMoriston, a prestigious position in Scottish cultural history. The design is reminiscent of a gable ended church, albeit somewhat smaller, and the Historical Environmental Records do mention the possibility of an early church onsite. Closer examination of the immediate area did not display evidence of raised works hidden beneath the turf, although it would make an ideal subject matter for further archaeological investigation. 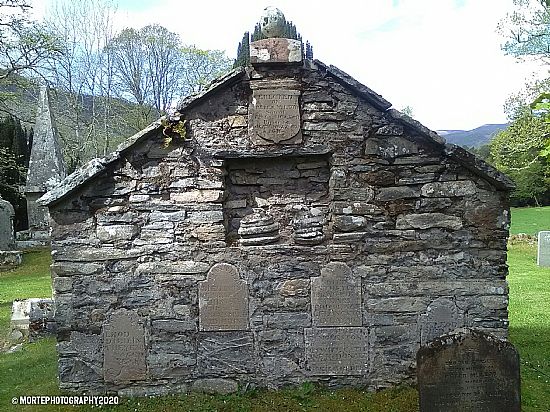 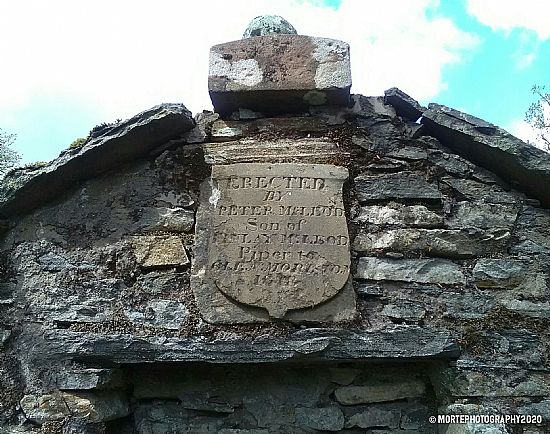 Just to the north of this 'memorial wall,’ for the want of a better description, is a fine piece of funerary sculpture, a large pedestal chest tomb. Each side is framed by a pair of exquisitely carved torches, depicted upside down, symbolising life now extinguished whereas the florette designed 'feet' remain remarkably intact. Sadly the scroll work on top has not survived the rigours of time. Erected by James Grant, writer for The Signet, the accompanying inscriptions commemorate future generations of the Grant family now passed. 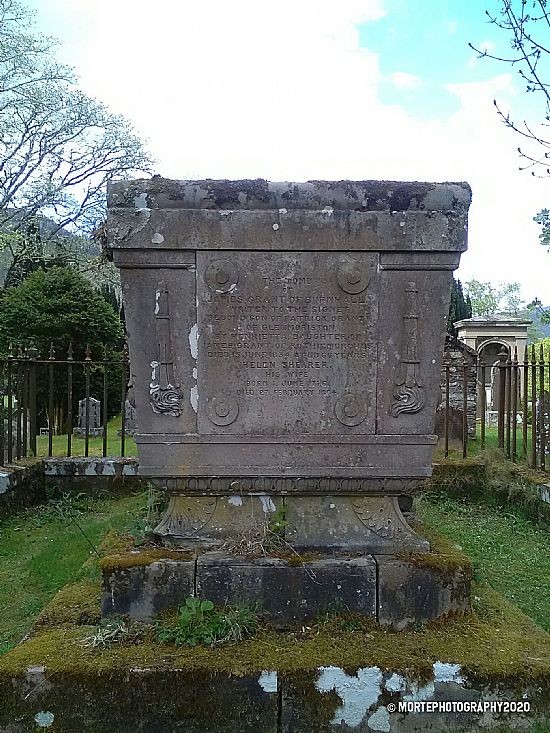 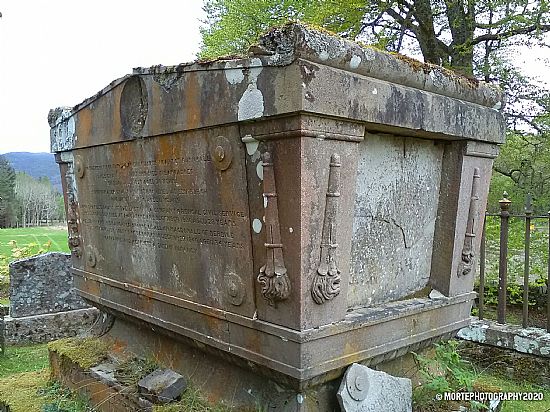 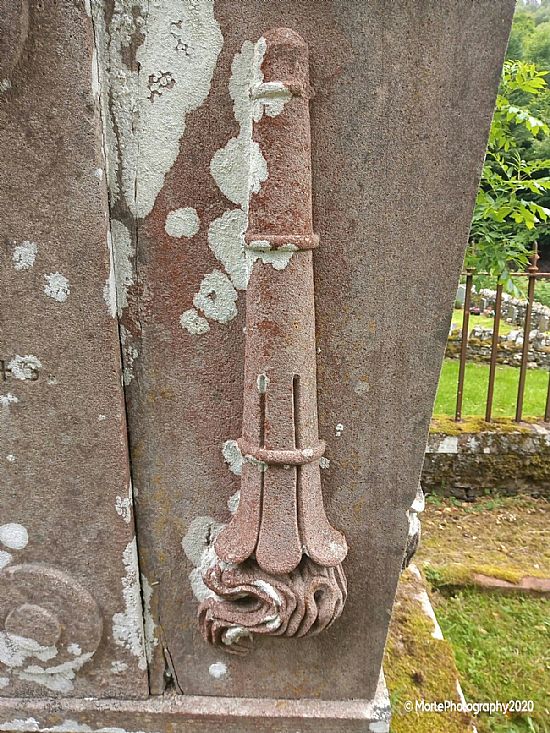 Other Grant family members are buried throughout the grounds and include Laird of GlenMoriston, James Deen Grant, who passed away in 1987, and Private W Grant, a Seaforth Highlander, who died during the First World War. His is the only official Commonwealth War Graves Commission gravemarker to be found within the burial ground. Finally, there are a number of grave slabs, dating from the mid-1800’s, poking out from under the turf. Regrettably many of the inscriptions are now ineligible, but I did find this rather nice Memento Mori slab dating from 1764. Always a good field trip when you stumble across a skull and crossbones! 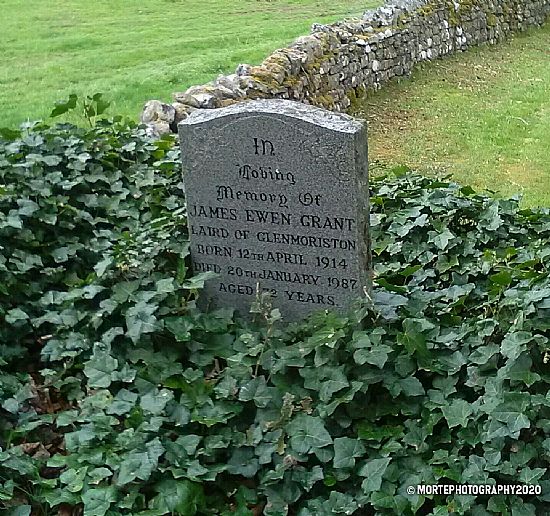 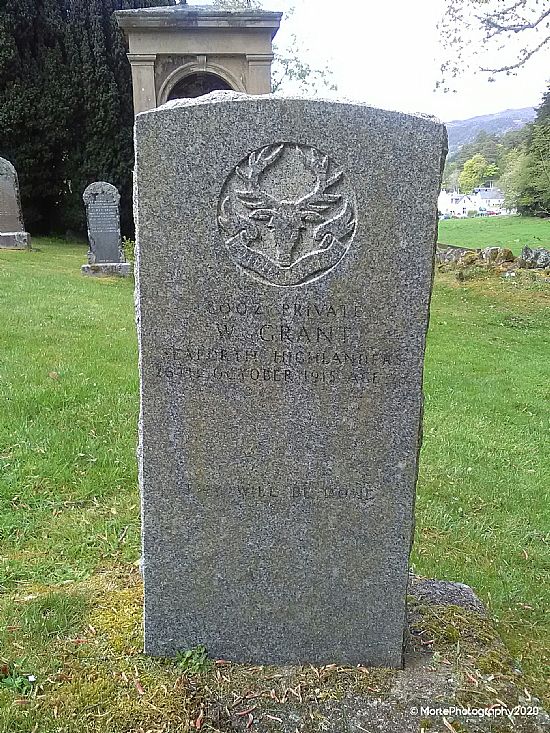 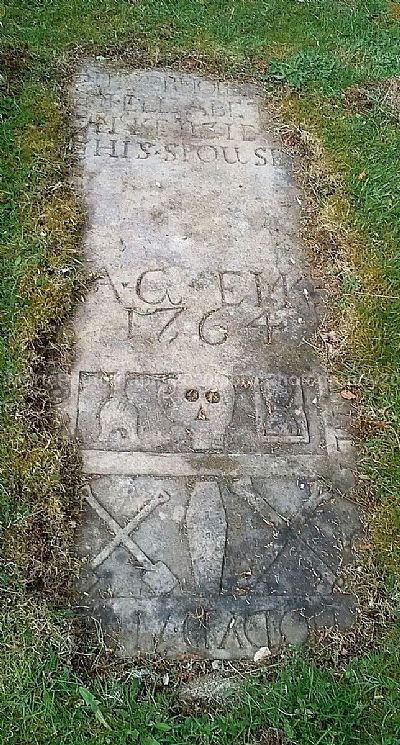 Yet surprisingly, one of my favourite gravestones is the least innocuous. No ornamental design, no added accoutrements, just simple and straight to the point: 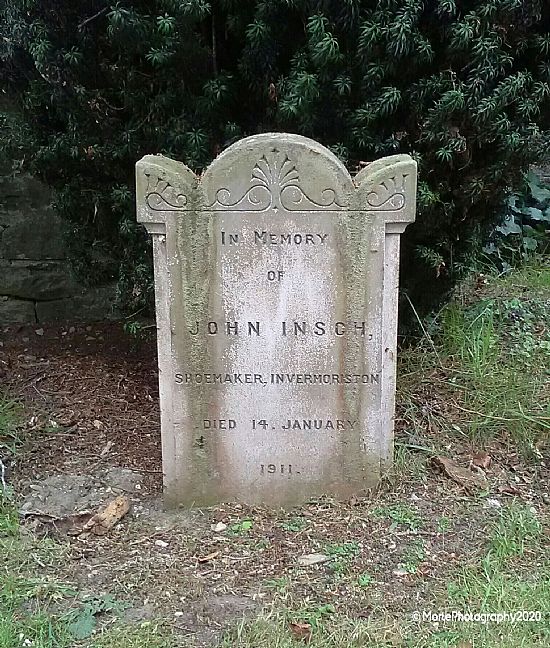 So there concludes our brief look at this rather delightful, albeit small burial ground. If you are ever in the area, maybe passing through on your way to somewhere else, please stop for a short while and explore. You will not be disappointed.

Comment from Suzie at 13:59 on 13 October 2020.
What a sweet wee place, so many things to see esp. the bridge. The Memento Mori that you stumbled on is quite beautiful, I love chance discoveries like this! I have to say that this is perhaps the first time I've ever looked closely at a chest tomb and you brought it to life for me and like you say, the torch is exquisite. A great post, very interesting Lorraine, thank you