Until recently your stereotypical Victorian era cemetery hadn't truly figured in my research remit. My real passions, and work, have always veered towards burial grounds, the older the better, and over the years I have been privileged to work on many such sites, both here and abroad. All this changed, however, during the recent Coronavirus lockdown, here in the UK, when for five weeks I found myself trapped in Inverness, Scotland, right on the doorstep of Tomnahurich Cemetery. It was here that I began to appreciate the beauty of such cemeteries, as Tomnahurich quickly became a lifeline during this unprecedented and stressful time. 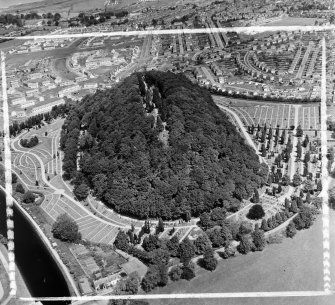 Tomnahurich Cemetery is laid out along the summit and slopes of Tomnahurich Hill, the Hill of the Yews, approximately 1.5km south-east of Inverness city centre. Prior to its use as a cemetery, Tomnahurich was described as a 'most remarkable hill… a beautiful, insulated mount, nearly resembling a ship, with her keel uppermost.' (Old Statistical Account, 1793). Rising up to 65m (223 feet) above the Inverness plain, for centuries this prominent landmark had been the focal point for numerous community activities, such as the annual horse race, which traditionally took place around the hillside on the 24th and 25th of May. 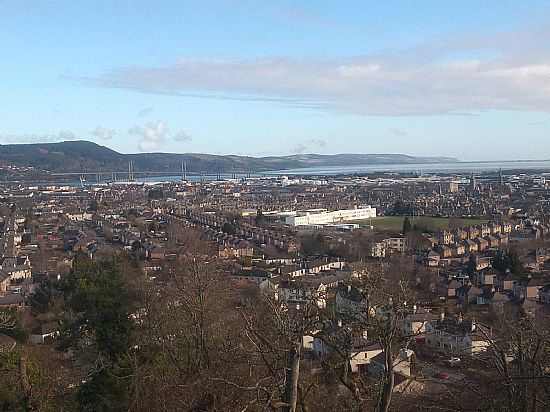 View from the plateua summit overlooking Inverness and beyond

The cemetery was first developed as an extramural cemetery by the Inverness Cemetery Company, a joint stock company, and opened to the public in 1864. Originally occupying only the hill slopes and summit, access to the cemetery was by way of the North Lodge, located adjacent to the old farmstead of Tomnahurich. The 1868 Ordnance Survey map also shows a gate at its southern point that opened onto the Glenurquhart Road, near Tomnahurich Bridge. As the population of Inverness grew the cemetery environs naturally expanded onto the surrounding floor below, forming a wedge type shape between the Caledonian Canal and the Glenurquhart Road (A82). As such, an additional section of the cemetery was opened here in 1898. A new gate and lodge house, designed by Alexander Ross, was built to accommodate the addition, whilst the North Lodge was converted into a mortuary chapel. In 1909 the Burgh of Inverness took over the maintenance and responsibility of the cemetery. 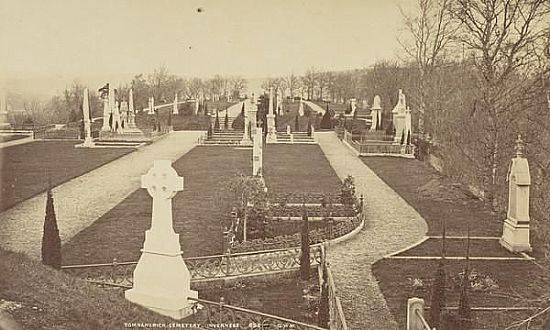 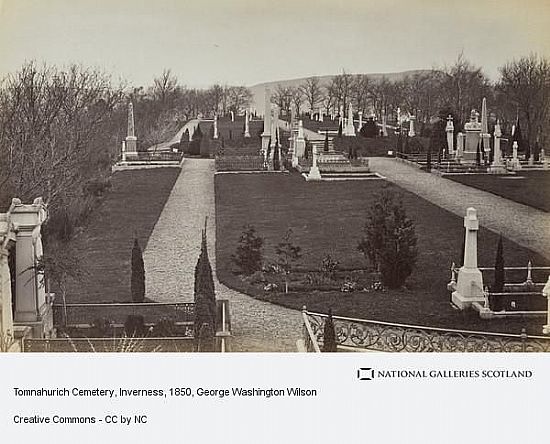 The tree covered hill is enveloped by a series of pathways and terraces, with one main drive that clings to the west flank of the hill. On the flat plateau summit there is an extensive circular turning area that was originally designed for access by horse-drawn carriages, it is still used by motor vehicles today. Leading off from this area, on both sides, is the formalised cemetery, which houses some splendid monuments, as well as offering those who have survived the climb spectacular views overlooking Inverness and beyond. In 1790 Thomas Pennant wrote:

'The Tomman' he wrote 'is of an oblong form… its sides and part of the neighbouring plains are planted, so that it is both an agreeable walk and a fine object. It is perfectly detached from any other hill; and if it was not for its great size might pass for a work of art. The view from it is such that no traveller will think his labour lost, after gaining the summit.' (Pennant, 1790). 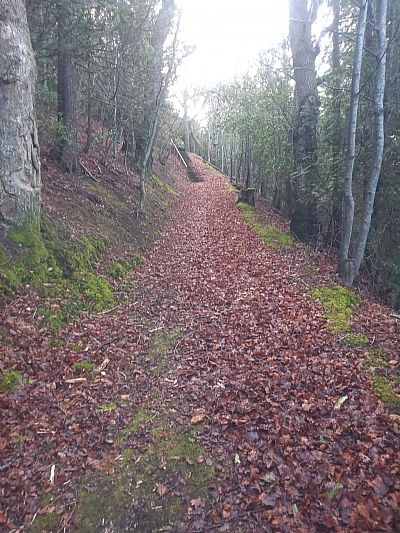 Pedestrian pathway that traverses the hillside 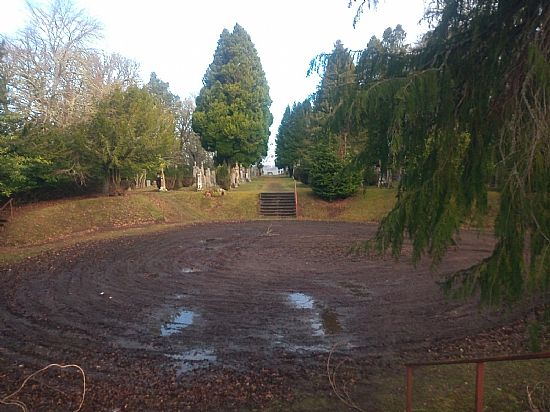 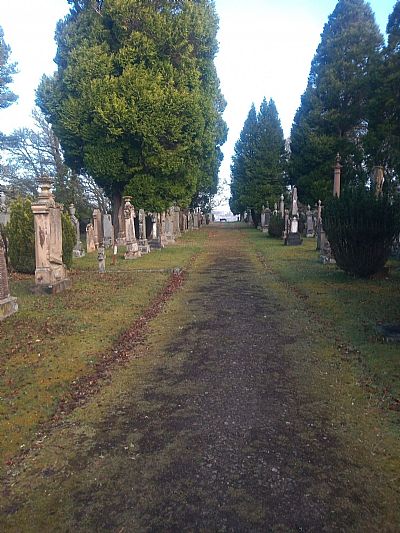 The western and southern slopes of the hill are predominantly laid out to terrace and are interconnected by flights of steps. Here you will find some of the cemetery's most elaborate monuments. As with most cemeteries from this era, the hill is surrounded by dense woodland, comprising a mixture of broadleaf trees, specimen conifers, particularly Lawson cypress and Douglas firs, as well as a vast array of Irish yews. On the lower slopes planting of invasive species, such as Rhododendron, has been rather, if not too, prolific. The flat ground around the base of the hill has a more modern feel about it and has been laid out in a series of phases as the cemetery expanded. It consists of a network of paths lined with small headstones of varying design. 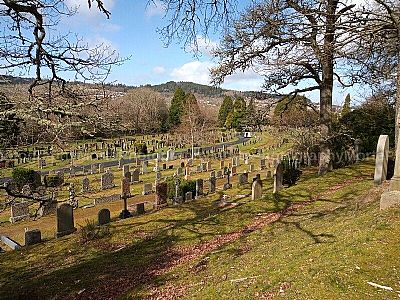 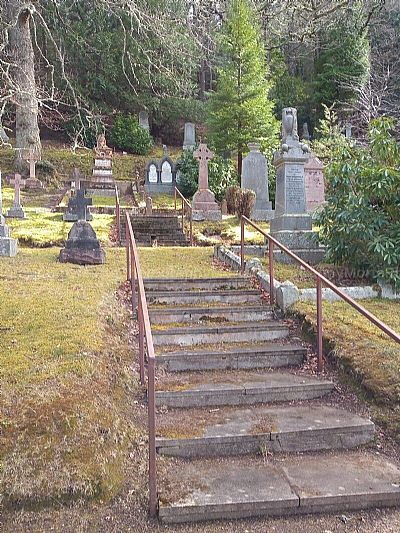 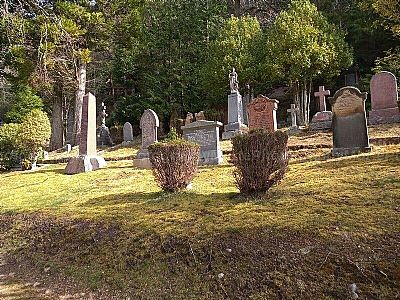 Tomnahurich has a wealth of associative folklore, such as the Celtic legend of Fionn, who trained his dog Bran to walk two of every species of animal around the hill in order to avoid the enchantments of an Irish rival, as well as that of the thirteenth century seer, Thomas the Rhymer, who is reputed to be buried beneath the hill, together with his men, ready to rise again and save Scotland in her hour of need. But it's most endearing mythology pertains to faerie folk, in fact the Fairy Queen herself is reputed to hold her court here, hence Tomnahurichs' alternative epithet 'Hill of the Fairies.' One tale relates how a handsome young piper refused the Fairy Queen's advances and was warned that if he did not stay with her at Tomnahurich and dine on fairy food he would never see his family again. Unperturbed he refused but, alas, when he returned home his wife and child had mysteriously disappeared. A fairy messenger then visited the distraught piper and told him that if he returned to the hill and sang a song of their chosing, his family would be returned to him. He did, and they were. Another tale concenrs the fate of two fiddler's, or a single fiddler depending on what version you read. But both follow a similar pattern, whereby the fiddlers are lured into playing at a faerie gathering inside Tomnahurich Hill, only to emerge later in the evening to discover that hundreds of years had passed by. Each version ends with the fiddlers turning into dust! A full rendition of the tale can be viewed by clicking on the link below:

Finally, no discussion of Tomnahurich can go by without mentioning the famous Brahan Seer, the Coinneach Odhar who, according to legend, received his gift of prophecy from 'those ancestral spirits or fairies who haunted burial grounds and graves.' In the seventeenth century he made two intriguing predictions concerning Tomnahurich, which could be argued have since come to pass. The first concerns the cemetery itself, when he stated that one day Tomnahurich Hill would be 'under lock and key, and the fairies secured within.' It is also said he predicted the Caledonian Canal, which flows directly past the west side of the hill: 'Strange as it may seem to you this day, the time will come, and it is not far off, when full-rigged ships will be seen sailing eastward and westward by the back of Tomnahurich, near Inverness.' 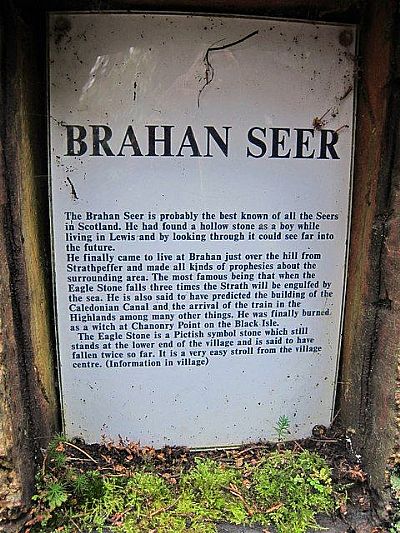