Following on from last week's post regarding the history of Tomnahurich Cemetery, this week I have decided to focus on some of those people interred within. As with any formalised burying ground, Tomnahurich has its fair share of characters, from the richest merchant bankers to the unpretentious horse hirer. The particular subjects I have chosen for discussion probably go under the radar somewhat. After all, none could be accused of having an elaborate grave memorial. In fact I would classify them as rather innocuous. The type of gravemarker you would walk past without giving a second glance. A pity, as there are some compelling tales to be told.

Sited on a pathway corner, located on the lower grounds of the hill, sits the unassuming gravemarker of a 'pioneer crystallographer.' I admit I had no conception of what a crystallographer actually was when I first clapped eyes on the stone, so needed to do a little research. In essence a crystallographer examines the molecular and atomic structure of crystal forms of materials, such as metals, gases and biological materials such as proteins, nucleic acids and viruses.

Born in July 1900 in rural Perthshire, on the family farm, John Monteith Robertson rose from humble beginnings to become the Gardiner Chair of Chemistry and the Directorship of the Chemical Laboratories at the University of Glasgow. He later became a Fellow of the Royal Society and was awarded the Davy Medal in 1960 for his services to chemistry. His claim to fame? Well, in 1960, together with his research team, Robertson finally mapped out the structure of limonin - the bitter principle of citrus fruits whose molecular structure had eluded chemists since 1841. For crystallographers it had been a conundrum second only in magnitude to that of vitamin B12. A fuller description of Robertson's career and achievements can be found by clicking on the link below. 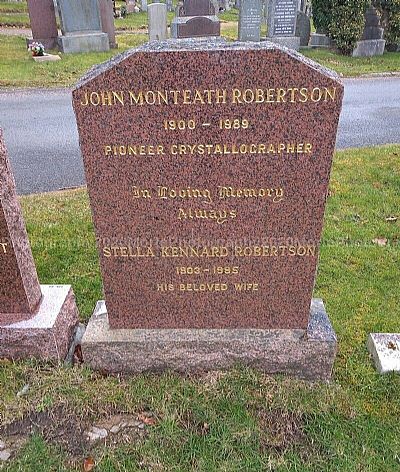 2) The Bible Woman of Inverness

‘Here Lies The Mortal Remains’ is without question one of my preferred memorial epitaphs, although in this instance little else is forthcoming about one Lilias Milne. No information is given about her place or date of birth, just her death, in 1920. What we do know, however, is that Lilias came from a proud tradition of Bible Women, local women who supported female missionaries in their Christian evangelical teachings and social work. The title 'Bible Woman' was first used in London in connection with a female evangelist Ellen Henrietta Ranyard who, during the nineteenth century, would administer to the sick women in some of London's poorest areas. Together with a selected group of female advocates, she would read and distribute the Bible to them, hence the name Bible Women. From London the concept quickly spread throughout England and Scotland, before being utilised by missionary stations in Asia and Africa. Lilas was obviously highly thought of in this regard, and for twenty four years she would openly share her faith with the women of Inverness, read extracts of the Bible to them as well as calling on the sick and troubled of the parish. 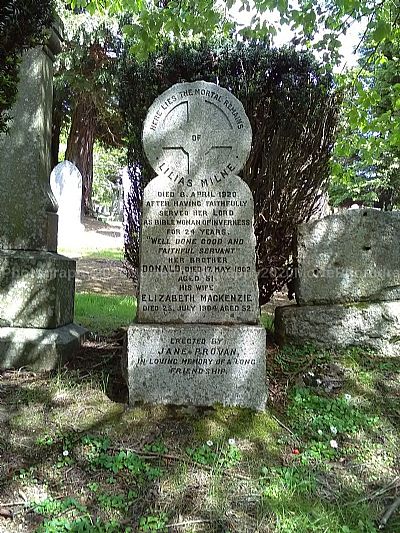 Up on the plateau summit, located amongst the Victorian memorials, is to be found this unusual modern wooden cross complete with a plastic enclosed A4 paper obituary. The phrase 'sticks out like a sore thumb' was invented for this particular commemorative cross. Yet the simplicity of the grave memorial belies the importance of who is interred below - Alexander Mackenzie, the Highland Clan historian. I have uploaded a clearer image of the accompanying dedication, so it should be easy to read, but in brief Mackenzie was born in Gairloch in 1838, eventually becoming a renowned historian and author in later life. His defining work on the Highland Clearances earned him international acclaim. He later became editor and publisher of the Celtic Magazine, and the Scottish Highlander, and was elected an Honorary Chieftain in 1894. 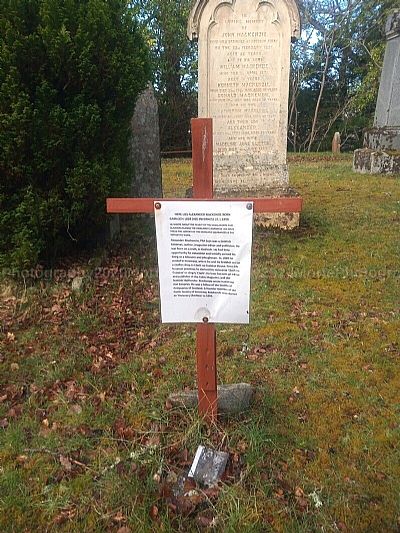 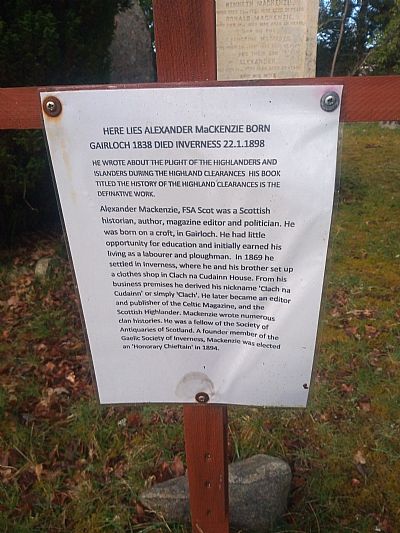 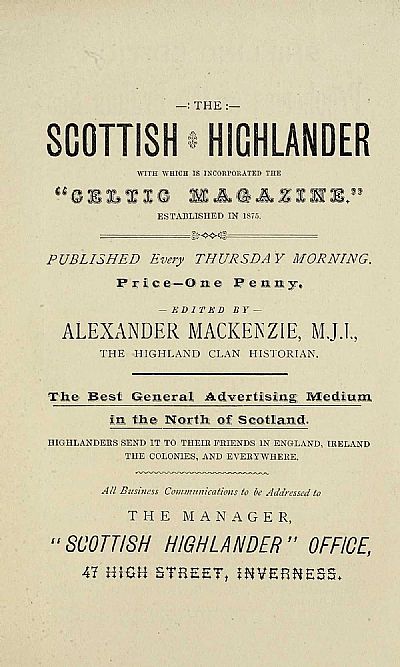 Very little is known about Tomnahurichs' resident 'Lion Tamer.' His gravestone inscription simply reads “In Loving Memory of Ambrose Salvona. Lion Tamer. Died at Inverness 13th October 1917. Aged 88 years.” His origins are somewhat shaky with various records documenting his birth in either London or France, although family members insist he came to the UK from Parma, Italy, sometime in the late nineteenth century, in the company of a dancing bear! Married twice, and a father to at least ten children, how he came to be buried in Tomnahurich is a mystery. It is believed he travelled to Inverness around the age of eighty, a considerable distance away from his family, eventually dying eight years later in what was then Inverness Poor House, now a block of residential flats. According to the weekly death notice, published in a local newspaper, a procession carried his body across Inverness to Tomnahurich, where cemetery records state that he was “buried by friends." 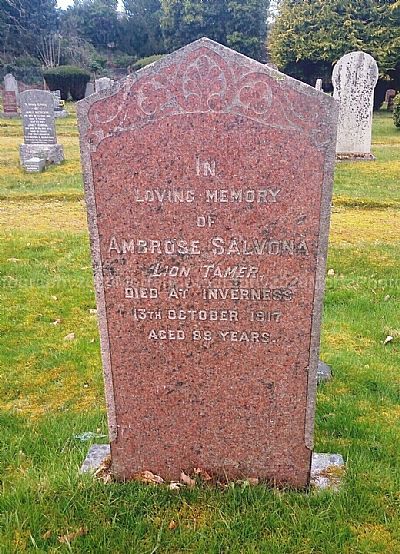 There are many war memorials dotted throughout Tomnahurich. Some are official CWGC memorials, whereas others are private commemorations erected by family members. An exceptional example of the latter can be seen below. Located a short walk from the Glenurquhart Road entrance, it is a simple granite memorial that only hints at a remarkable war time story. The initial dedication commemorates the passing of 21-year old Sub-Lieutenant J. Grigor Mackintosh (nee Riggs) who was missing, presumed killed in action, in Singapore, during World War Two. 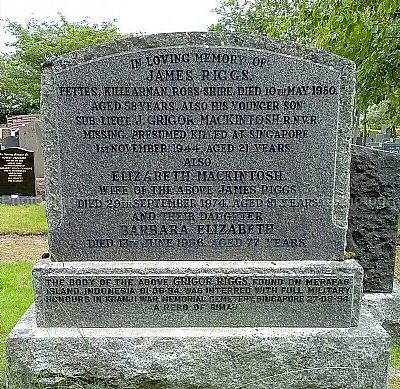 Riggs was a member of the elite Z Special Unit, a joint Allied special forces unit formed during the Second World War to operate behind Japanese lines in South East Asia. Predominantly Australian, Z Special Unit was a specialist reconnaissance and sabotage unit that also included British, Dutch, New Zealand, Timorese and Indonesian military personnel. In November 1944 the Unit was tasked with carrying out Operation Rimau, an attack on Japanese shipping located in Singapore harbour. Led by Lieutenant Colonel Ivan Lyon, of the Gordon Highlanders, unfortunately the unit's clandestine activities were quickly discovered by local Malay authorities, and in the ensuing firefight with Japanese forces a number of the unit's men were either killed or captured. But Riggs, together with 21-year old SGT C. Cameron of the Australian Imperial Force, bravely held off a small Japanese force that landed on the Merapas Island, their courageous efforts allowing other Operation Rimau members to escape by boat.

In 1994, after an exhaustive search, the bodies of Riggs and Cameron were finally discovered on Merapas Island, whereby their remains were brought back to Singapore and were buried with full military honours in Kranji War Memorial Cemetery on the 27th August 1994. As is clearly seen on the Tomnahurich memorial stone, a later engraved panel was added to its base to commemorate the event.