Away from the bustling city streets of Inverness, Scotland, in the grounds of the Old High Church, there stands an often over-looked yet unique burial enclosure, namely the Robertson of Inshes Mausoleum. Constructed in 1664, by stonemasons James Gordon and William Durham, such buildings were the upshot of a change in Scottish burial practices, commencing in 1560 when Scotland officially became a Protestant country. With Scottish Parliament renouncing the Popes authority, and the practice of mass declared illegal, ministers were thus banned from attending burials, and burials within a designated churchyard were forbidden. A few years later, in 1564, the Hawick Kirk Sessions formally prohibited “burials within kirks and suchlike erection of tombs” and prosecutions were abounded for “breaking the kirk floor and burials of bairns.” By the year 1581 all burials inside churches had been outlawed in Scotland, although those with financial means would often find a way to skirt around the issue, such as converting an already disused religious structure into a mausolea, or by adding the odd burial aisle to an already established church. 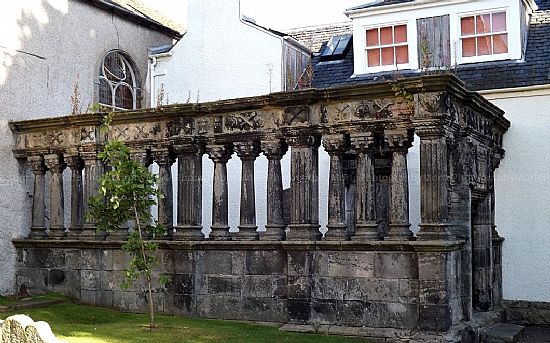 The Robertson of Inshes Mausoleum 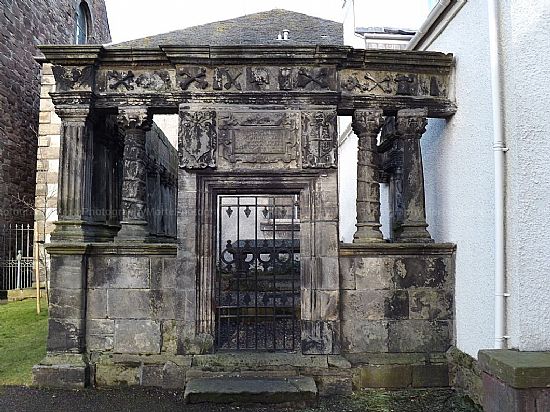 Entrance to the Robertson of Inshes Mausoleum

The Robertson Mausoleum is in a remarkable state of preservation for its age. Consisting of a simple square enclosure, formed by the rear gable wall of the church and two screen walls, the structure is held aloft by a series of open columns, which sit firmly upon an ashlar base. Those columns on the west exhibit a series of simple carved foliated capitals, whereas the remaining architraves and lintels depict an abundance of rich mortality symbols, including wigged skulls, crossbones, angels of the resurrection, together with an assortment of grave accoutrements. 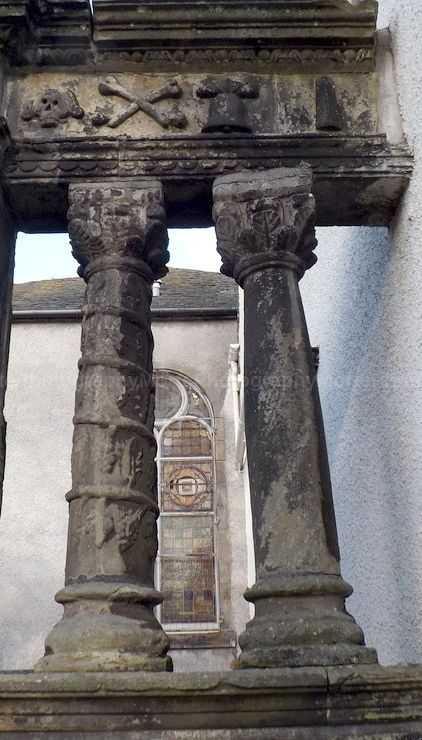 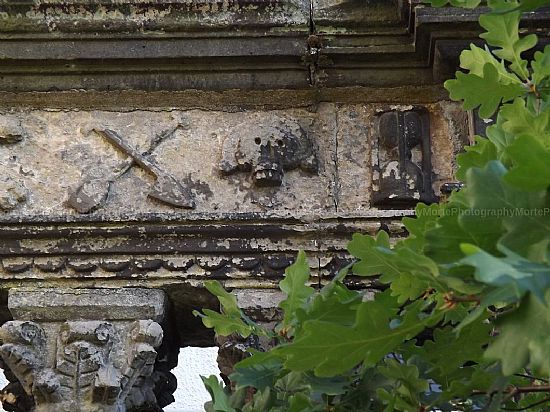 Various examples of mortality symbolism, including death related skull, crossbones and a timer 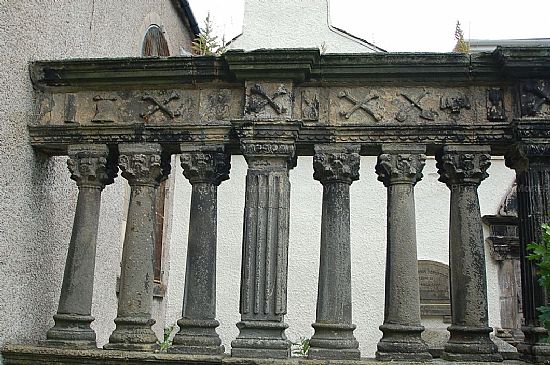 Further examples of mortality symbolism, including a deid-bell, which were common in Scotland and were traditionally rung in churches and/or used in funeral processions, together with graveyard implements 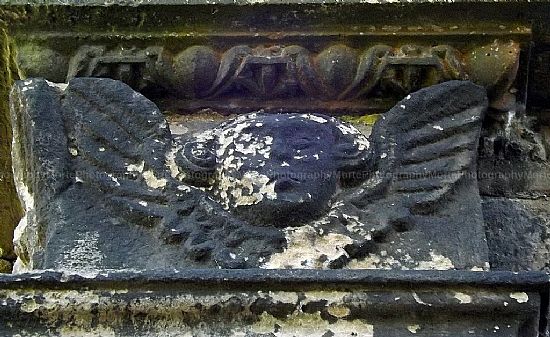 A Rather Disgruntled Looking Angel

Above the gated entrance you will find an inscribed passage, written in Latin, which offers a clue to the identity of those commemorated. It reads:

‘The monument of Mary Purvis, mistress of Watson, mother of Janet Sinclair, wife of John Robertson of Inshes. She died on 14th April AD 1660, at the age of 88. Glory is the reward of virtue.’ 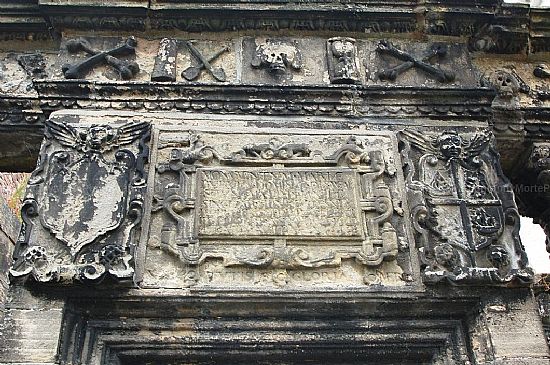 Latin Inscription Above the Entrance Gateway

The Robertson’s have a proud history, tradition often attributes their origins to the blood of the mighty MacDonald Clan, albeit the first Robertson of note appears to have been one Duncan Robertson, head of Clan Donnachie. The Robertson’s of Inshes are mentioned as one of his kindred by the celebrated warrior poet Alexander Robertson of Strowan. The above-mentioned John Robertson was born around 1584, and by the time he reached his early twenties he had already become a successful merchant and major landowner within the parish. Records show that on the 7 July 1615, in the presence of John Cuthbert of Auld Castlehill, Provost Alexander Paterson, William Campbell and Duncan Forbes, Robertson was granted a free burgess of Inverness, acquiring one of four coble fishing rights on the River Ness, as well as Easter Leys from Simon, Lord Lovat. In 1619 he added the lands and barony of Inshes to his ever-growing titles, cementing the future success of the Robertson clan a few years later when, in circa 1624, he married Janet Sinclair, a merchant’s daughter from Edinburgh, signing the marriage contract ‘Ihone Robertson son of Easter Inshes with my hand.’ Janet gave birth to three sons and one daughter:

John Robertson appears to have died on or around the 17 December 1657, of causes unknown, and was survived by his wife Janet and three sons, the second son Hugh, who died in 1703, can be seen commemorated within the mausoleum by a rather delightful wall mural, exhibiting various symbols of death, including a rare ouroborous, an ancient symbol representing the cycle of life and death, and a rather cheeky looking skull. 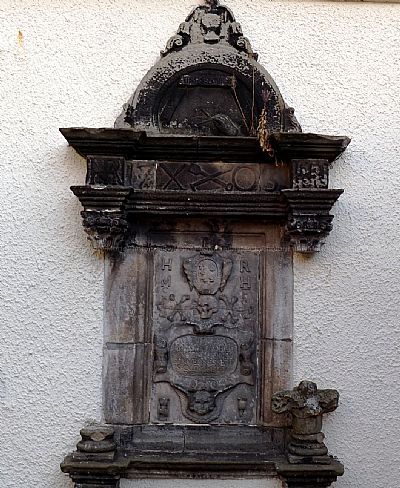 Old High Church, Inverness is open to the public, with the Robertson Mausoleum sited just inside the churchyard after entering from Church Street.